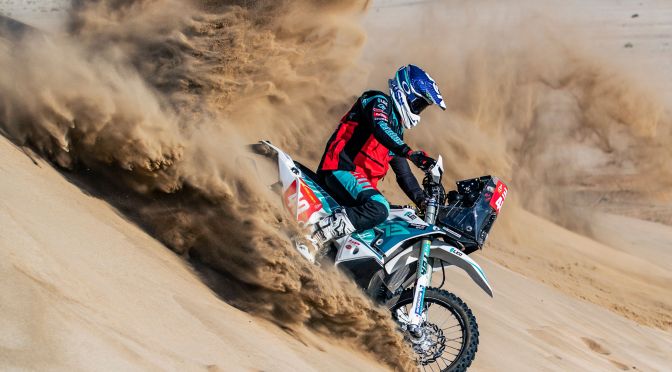 Up close with Charan Moore

In what has been described as the hardest Dakar in recent history, Dakar 2023 has proven to be a stunning success for South Africa across all the various categories and classes.

The rally, which kicked off on 1 January 2023 on the shores of the Red Sea in Saudi Arabia, saw a total of 455 vehicles across all categories and classes traversing the 14 different stages that covered nearly 8000 km.

This year 31-year old Charan Moore, riding for HT RALLY RAID HUSQVARNA RACING, and familiar to many as the race director of the Roof of Africa, had one goal in mind and that was to win in the Original by Motul class. This despite the fact it was only his second Dakar and he was up against a determined field of very experienced and committed riders.

The fact that he succeeded despite almost impossible weather conditions, was a testament to his dedication, and the skills he has honed on the equally challenging gravel plains of Namibia and in Lesotho’s Maluti Mountains. After a rollercoaster two weeks Charan emerged victorious taking top honours in the Original by Motul category and coming in 28th overall in motorcycles and 12th  in the Rally 2 Class.

Adrian Scholtz, Motorsport South Africa (MSA) Chief Executive Officer, caught up with Moore to find out more about this incredible racer and what really goes into competing in this category where it is not just about one’s riding ability, but also one’s mechanical competence, organisational abilities, and capacity to perform mentally and physically in the face of extreme and cumulative fatigue.

Can you start off by telling us more about yourself. Where did your love for the sport come from and when did you start competing?
I grew up around motorsport and pretty much have fuel running through my veins. From a small town in the Free State to a racing family that travelled across the country racing and basically creating our second family. My father ran numerous race teams from the early 80’s to the early 2000’s, and I began my racing career in 2008 at age 16. I have dabbled in all facets of the sport – Cross-Country, Enduro, Motocross, Extreme Enduro and now Rally racing. I love the sport and the freedom it provides.

What appeals to you about the Dakar?
The challenge. It is by far the most intense, emotionally and physically challenging adventure you can experience in motorsport. That, as well as the true cross-country experience – 400km a day exploring vast terrains in incredible countries. It is pure adventure.

How many competitors participated in the Original by Motul class this year?
If I’m not mistaken there were 38 competitors in the class.

When we talk about unassisted what exactly does that mean?
No external assistance at all. The Original by Motul competitors become quite a close-knit family and we are allowed to help each other as much as needed. The limitation comes from receiving any external help from mechanics or family or friends at the event. So, all bike work is completed by yourself or with the support of any original by Motul competitor. You have to setup and take down your own tent and manage your own wheels, spares and tools for the duration of the event. The real authentic Dakar experience.

What kind of support do you get from Motul?
Motul provide all lubrication and oils for the Original by Motul competitors for the duration of the event. So, in our zone there is a Motul stand filled with all the necessary oils and lubricants to service the motorcycles. From the 300V engine oil to chain lube to bike wash and everything in between. Motul also offer an oil analysis at the event to ensure that the motorcycles are running at optimum capacity.

You are no stranger to tough off-road races – how does Dakar compare?
In 2022 I was slightly disappointed about the difficulty of the event. Everyone put Dakar on this pedestal as the hardest event on the planet and I found it quite easily achievable. However, 2023 was a completely different story. By far the hardest race of my life. A combination of longer stages, more difficult stages and intense weather conditions created an incredibly challenging Dakar. But I loved every second of it.

Can you tell us about your training in readiness for the Dakar?
Physically I put a lot of time into strength training for the bigger Rally bike, as well as some good base training on the bicycle to ensure that I would be prepared for the longer stages. Then more specifically we did a lot of roadbook training in Botswana and Namibia to prepare the mental navigational element of Dakar. We tied this mental prep with specific preparations in the dunes in Namibia which was invaluable once we hit the empty quarter in Saudi. The final piece to the puzzle was getting my head screwed on straight to create the right mindset to tackle the hardest offroad event in the world.

We all heard about and saw the extreme weather conditions experienced. What was the hardest aspect of the race for you?
The hardest aspect of the event for me was definitely the elements. What most people don’t see about Dakar is the 3:00am wake up call and 3-hour ride along a tar road at 0-degree temperatures to get to the start of the special. Then racing as fast as possible for around 5 to 7 hours over 300 to 400 km. Then another 3-hour ride in the pouring rain and traffic through some of the busiest cities in Saudi to find the sanctuary of the Bivouac in the dark – wet, cold, tired and now the bike preparations start for the next day. It was intense.

What advice would you give to any South African rider planning to race the Original by Motul class in the Dakar for the first time? Looking back is there anything you would change?
Preparation and mental fortitude are key. If you fail to plan, then you plan to fail. The more you can have structured, organised and planned, the easier things become. You also need to have your nutrition planned for the entire rally before leaving to Dakar. Have a thorough work schedule that you are comfortable with planned for every stage of Dakar and stick to it. Have all your gear prepared and pre-arranged. If you can get all the small things right then the bigger issues become easier to deal with. This brings me to the mental side. Things change quickly and you have to be prepared to adapt and deal with these changes. I found that having a positive mindset and attitude, remembering the reason for competing at Dakar and the privilege it was to just be on the start line – this gave me the mental edge to deal with anything they could have thrown at us. Get those two elements right and the event will show you a new side of yourself that you never knew possible.  I wouldn’t change a single thing. I loved every second. The good times and the hard times. It made the entire experience more rewarding.

What is your next big challenge?
Finding support for 2024 Dakar. The biggest barrier to entry at Dakar is the cost. But I honestly love this type of racing more than anything I have ever done before in my life, so the goal is to do everything possible to get back in 2024. My next big challenge is definitely finding a partner that shares my vision to compete at this level and shares the same values and ambitions to take on the toughest challenge possible.

Will we see you defending your title and competing in next year’s Dakar?
I won’t be defending my Original by Motul title but I will be on the start line of the 2024 Dakar Rally competing for a new crown.  I will be back on that start line proudly representing South Africa, my federation Motorsport South Africa and each and ever supporter of the journey. Hopefully with the backing of some great partners.

Scholtz, concludes, “We applaud Charan and all of the rest of the South African participants and teams who excelled at this year’s Dakar. MSA is so incredibly proud of their outstanding achievements and salutes their enormous dedication, talent and commitment.  This is an incredibly proud moment for South African motor sport.”

PREPARED ON BEHALF OF MSA BY CATHY FINDLEY PR.