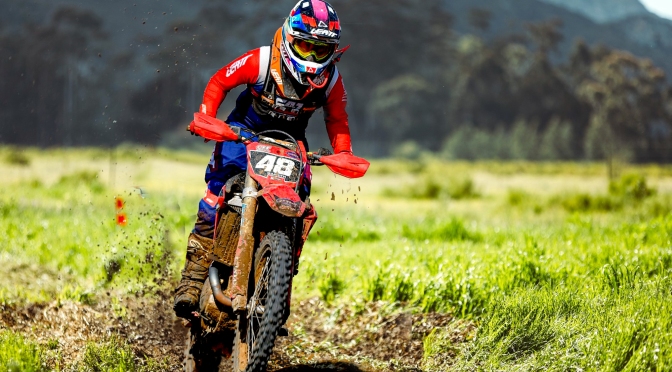 Mike joins Franchise Co Sleepover Tork Craft regulars Gareth Cole and Hayden Louw on a trio of new 2023 model Honda CRF 450 RXs in what promises to be a formidable attack. All three men have one thing in mind, and that is to repeat that 2022 open class OR1 1-2-3 in pure Honda red this year, with an eye on an overall title as well.

Just as impressive is Franchise Co Sleepover Tork Craft’s four-man Honda CRF 250 RX OR3 attack. Honda rider Haydn Cole is looking to bounce back from injury in 2023 and he has no less than three new class teammates at his side. Fourth in OR3 in 2023 John Botha and former OR1 lad Tyron Beverley join Honda’s OR3 attack alongside Junior graduate Noah Maartens.

Senior rider Wynand Delport and Gerhard Vorster will fly the Franchise Co Sleepover Tork Craft Honda flag in the senior class. Master Warrick van Schalkwyk is looking forward to a full season on his new Honda after coming so close to the madala’s title despite missing a round last year.

Last but not least, Franchise Co Sleepover Tork Craft Honda will be attacking the kid racing classes for the first time in 2023. Third in last year’s championship, Murray Smith and quick Jaden Els will don the red in 85 Senior, while Liam Scheepers is the lad in red in 85 Junior.

“There’s nothing small about our 2023 attack – we have a bigger and far stronger team to do the business. “The Red Rockets are back in force in South African Cross Country racing, and we will be fighting to win. “Let’s go paint the town red boys!”