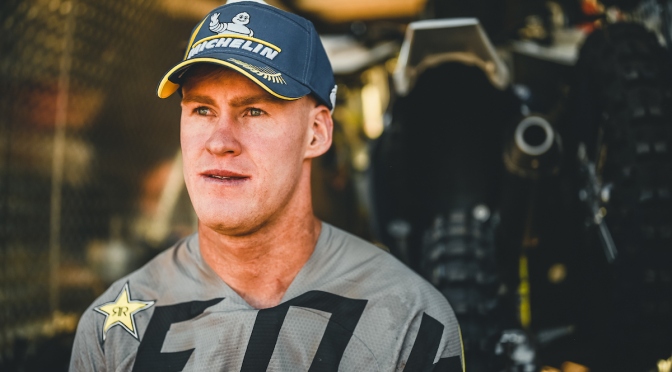 Battle drums were beating as riders lined-up for the penultimate round of the National Cross Country Championship on Saturday. With two national titles within their reach, Rockstar Energy Husqvarna’s Brett Swanepoel and Davin Cocker navigated through the unforgiving Delmas dust to secure every championship point they could get.

Adding an extra element of excitement to the event was a mass start – something that would offer an advantage for riders who managed to get ahead of the dust first. When Swanepoel missed the opportunity for a holeshot, he describes feeling like he was racing with his eyes closed for most of the route.

“Within 500 metres from the start line, I couldn’t see anything. I had to make the decision to play it safe instead of passing other riders blindly. With one more round left, the risk of losing the championship by riding recklessly wasn’t worth it,” explained Swanepoel.

For the second consecutive race, the rider was hit by what can only be described as another bout of bad luck. As he raced to get up front, he heard a loud noise and realised that his exhaust had broken. He managed to hold his composure until he reached the pits where his team did damage control and repaired the issue.

The fight for the OR1 Championship will now come right down to the wire as Swanepoel lines up for an ‘all or nothing’ season finale tied for the lead. He commented: “Big ups to my team for making a plan this weekend so I that could salvage the championship and get to the finish line. It’s all or nothing now – everything depends on the final race of the season and I’m going to give it everything I’ve got.”

Rockstar Energy Husqvarna teammate Davin Cocker put on yet another eye-catching performance as he stormed to victory in the OR3 Class and fourth place overall. An impressive start set the rider up for success and put him in a prime position to stay ahead of the dust.

“I started off in second overall and was later passed by two bikes. I managed to hold onto fourth for the rest of the race despite the challenge of racing in the dust. It was intense, but I found the track really enjoyable – my Husqvarna FC 250 handled it so well and never missed a beat,” said Cocker.

Cocker’s performance puts him back in the points lead as he heads into the season finale. As the nail-biting event looms large, Husqvarna South Africa’s Brand Manager Fred Fensham gives a parting shot: