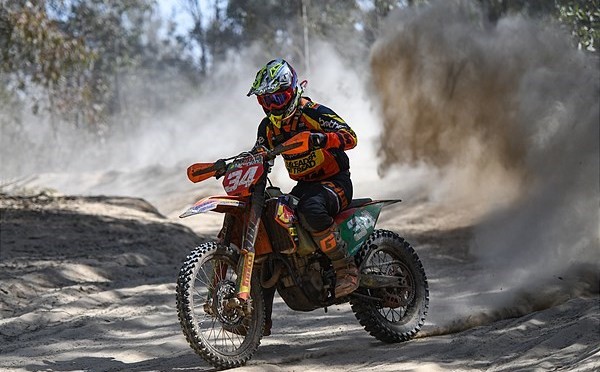 It all comes down to this…

Brother Leader Tread KTM are preparing for the battle of the season. The National Cross Country season finale takes place as a double-header event in KwaZulu-Natal from 17-18 October. With two riders sharing the points lead in their respective classes and another rider defending the top step by just two points, this weekend promises to be one of the most action-packed races of the season.

Leading the charge in the OR1 Class is the team’s newest recruit Charan Moore. The rider will go head-to-head with championship rival Kenny Gilbert, who shares the top spot of the leaderboard with Moore. As he lines up on the cusp of Cross Country glory, Moore will leave no table unturned in the fight for his first OR1 national title with the orange team.
Brother Leader Tread KTM teammate Jarryd Coetzee heads to Natal in a similar situation to Moore. The rider will need to get ahead of fellow competitor Brett Swanepoel, who enters the event with the same amount of points as Coetzee. Having snatched up the OR2 championship in the final race of the 2019 season, Coetzee will draw on his past experience to once again prove that he has what it takes to shine under pressure.

“There has been work, stress, sacrifices and obstacles to overcome – but every racer knows the road and has to walk it. I’m grateful for the opportunity to push my limits and can’t wait to see what we can pull off,” said Coetzee.

Rounding out the team is Bradley Cox, who currently leads the OR3 Championship. As the reigning 2019 champion, Cox has made it clear from the start of the season that he is prepared to fight to any end in defense of the red plate. After being frustratingly beaten to the line at the last round and with just two points separating him and class rival Davin Cocker, Cox is gearing up for the race of the season.

As the highly anticipated event draws near, KTM South Africa’s Marketing Manager Louwrens Mahoney commented: “Excitement is running extra high for the double header this weekend! I am fully confident in our riders and mechanics and all the team members – everyone is prepared and ready for anything! With it being two days of racing it is going to be really tough on everyone – saving the body and the bikes is going to be important for this double header! May the best men win!”