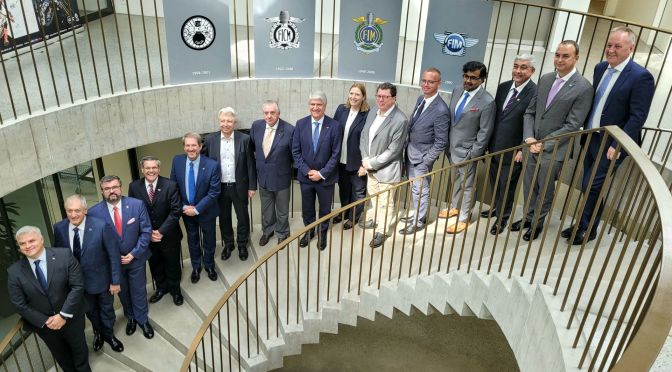 For the first time since February 2020 and the sanitary measures resulting from the COVID-pandemic, the entire FIM Board of Directors met face-to-face at the FIM HQ in Mies (Switzerland) on 7 and 8 September 2022.

On this occasion, the Board addressed many topics, in particular the following:

Situation in Ukraine: The Board of Directors reiterated its sympathy and solidarity with all those suffering, as a result of the Russian invasion in Ukraine. After having carefully considered the situation, the Board once again confirmed the decisions taken during its extraordinary meeting on 5 March 2022.

Sport: All disciplines were discussed with a focus on the promotion of the FIM Supercross World Championship and the 4-year renewal of the promotion contract with XIEM for the FIM SuperMoto World Championship. In addition, a reform of the Trial discipline as of 2023 was approved. Decision was made to revise regulations of the SuperMoto of Nations and Junior SuperMoto of Nations related to the awarding of points. Discussions related to the level of sound emissions also took place. Considering the current economic situation, the increase in transportation costs and airfreight, the Board decided to provide a travel indemnity of EUR 3’000 per National Federation (including the Continental Union teams) entering the Motocross of Nations. The sprint races to be introduced at all FIM MotoGP™ World Championship events as of 2023 were also addressed. The phase 2 of the FIM Racing Homologation Programme for helmets (FRHPhe-02) was presented to the Board.

Finance: The Board agreed on a draft 2023 budget as well as changes in calendar and licence fees which will be presented to the General Assembly for approval. The 2023 direct payments were also agreed upon.

Liaison with National Federations (FMNs)/Continental Unions (CONUs): The Board decided to submit the affiliations of Georgia and Barbados for approval to the 2022 General Assembly. An update on the FMNs/CONUs liaison initiatives and activities was presented as well as the results of the survey about cooperation between the FIM, CONUs and FMNs.

Marketing & Digital: Topics such as new digital and media opportunities (i.e. Web3, non-fungible tokens (NFT), Over-The-Top (OTT) etc.), the branding and sponsoring coverage of the 2022 ISDE edition (“6 Days”), the marketing initiatives launched for the “Ride to FIM Awards – the Future of Motorcycling”, the creation of a dedicated website for the FIM Flat Track World Championship, the launch of the 2nd edition of the “FIM Rides the World” video series as well as an update on the FIM Brand Identity tender were presented.

Commissions: It was reminded to the Board that all Commission Directors’ and Members’ terms of office will expire at the end of this year. The online application platform is now open until 30 September. Commission Directors and Members (with the exception of the LJI Director and Members) will be appointed for 2023-2026 by the Board during its meeting to be held on 3 December in Rimini (Italy).

International Foundation for Motorcycling (IFM): Since the IFM’s creation at the end of 2020, the first ever audited financial statements and management report were approved by the Foundation Board as well as the Swiss supervisory authority for the foundations.

Awards & Recognition: The Board awarded distinctions as well as several honorary memberships and title of Member of Honour, subject to the approval of the General Assembly.

The CONU Presidents, the Board Committees, the Working Groups and the departments of the Administration presented progress reports on their respective projects.

In addition, the CONU Presidents met on 8 September to share best practices and addressed topics such as the harmonisation of codes and general structure, the cooperation between the FIM and the CONUs, the sporting calendars, education & training as well as communication.