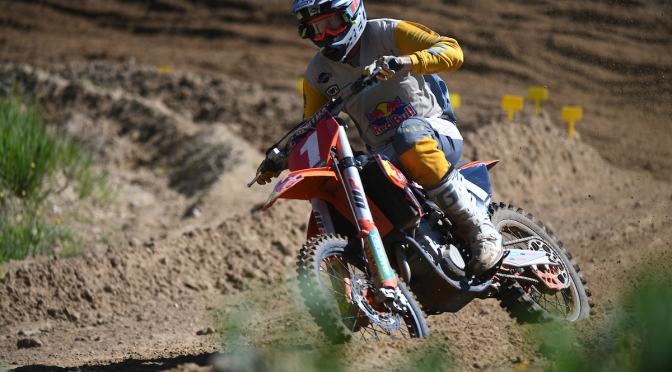 The penultimate round of the National Cross Motocross Championship will take riders to BORC, a Bloemfontein track renowned for its red sand, high speed and epic jumps. As the end of the season draws near, it’s full steam ahead for Red Bull KTM as they edge closer to claiming the four championship titles within their reach.

Taking centre stage is Tristan Purdon, who lines up with the points lead in both the MX1 and MX2 Class. The rider recently returned to South Africa after a trip to Europe to compete in the world’s pinnacle motocross race – the Motocross of Nations.

“It’s always an incredible experience to line up with the world’s best and identify places where we fall short. I learnt so much from the experience about what it takes to compete at that level and I’m excited to implement that in my racing locally. Since I’ve been back, I’ve been working on my starts especially,” said Purdon.

With a 21-point lead in the MX1 Class and 16-point lead in the MX2 Class, the rider is painstakingly close to snatching both national titles. Purdon is by no means complacent, however, and is more determined than ever as he braces himself for the final two rounds.

“Now is not the time to get comfortable. We’re in for a fast track this weekend that isn’t as hardpack as the last round, so I need to be ready for anything. The goal is obviously to win all my heats and extend my points lead going into the final round. If things don’t go according to plan though, I need to minimize the damage and make sure I don’t lose too many points,” added Purdon.

Also ready to battle it out for the MX2 Championship is Purdon’s Red Bull KTM teammate, Cameron Durow. The youngster has had an impressive debut season with the orange team and has experienced multiple wins in the highly competitive class. With only 16 points separating him from the top step, Durow will line up on Saturday with more determination than ever.

“I’ve done two races in Bloemfontein recently and won both, so I’m feeling really good going into this round. I’ve always really liked racing in Bloem and I’ve done quite well there in the past. The way the track flows suits my style of racing,” said Durow.

Durow also mentions making small steps of improvement both on and off the bike in the last few weeks of training. “With the championship coming right down to the wire, every small improvement will make a difference. I’ve been happy to make some improvements recently, both physically and on my bike,” he explained.

Taking his place behind the gates with a significant points lead is Highschool Class hero Jonathan Mlimi. The rider has gone from strength to strength this season and with two rounds to go has established a lead of more than 30-points on his competitors.

Mlimi is feeling as confident as ever after a good week of training and like Durow, really enjoys the Bloemfontein track. “The big jumps are obviously something that excites me, but the track is also really wide and has some nice ruts,” said Mlimi.

The rider’s goal has been the same since the start of the season – to win both his heats and make sure he gets good starts. He mentions working on his consistency over the last few weeks to make sure he hits every mark and minimize any mistakes.

Rounding out the team with yet another red plate is rising star Trey Cox. Consistency has been his secret to success this season in his fight for the Pro Mini title. Cox has built up a seven point buffer between himself and championship rival Neil van der Vyver.

While the gap gives Cox some breathing space, the fight for the championship is far from over. Cox only narrowly missed a win in the last round after a small crash that set him back, and will surely come back swinging as he looks to get back on the top step on Saturday.