The Federation of International Motorcycling (FIM), through FIM Africa, has approved the Federation of Motorsport Clubs of Uganda (FMCU), to organise the 2021 Motocross of Africa Nations Continental Championship scheduled for 6th-8th August 2021.

In a communication signed by the FIM Africa Secretary General to FMU, the event will be held at Victoria Raceway Park, Garuga along Entebbe road.

In accordance with the International Sporting Code of the Fédération Internationale de Motocyclisme, the competition, as approved by FIM Africa, clearly indicates that FIM Africa does not by the issue of the Permit, acknowledge or undertake any liability whatsoever.

It’s further outlines to organisers that :

FIM Africa shall not be liable to the Promoters, Organisers, or  any other person for any damages which any person may suffer as a result of the event or any occurrence or whatever nature running the event.

It is a condition of this permit that the FMN hosting the event has sufficient public liability cover, and a copy of the PL cover and policy will be sent to the FIM AFRICA Secretariat 6 weeks before the event for record purposes.

It concludes that: “It is a condition of this Permit that the promoters indemnify and hold the FIM Africa harmless for damages arising out of any occurrence at the aforementioned event”.

On receipt of the Permit numbered 002/21, FMU’s Vice President Motorcycling, Kisitu Mayanja, who was also appointed onto the Jury  as the Local Jury Member said, “It’s a great pleasure getting the permit in time, we await to accord the hospitality Uganda is known for and fight to rewin the title.”

Kisitu intimated that Zambia and Botswana, are so far the countries that have confirmed their participation ahead of the close of entries on 9th July, 2021.

More countries are expected to take part in the Continent’s prestigious event.

Zambia is the first foreign country to confirm, participation in the upcoming Motocross of African Nations (MXOAN) championship, set to be hosted by Uganda from the 6-8 August 2021, at the Victoria Race Way Park in Garuga.

A team of 30 Zambian riders has been registered to compete in the continental championship, which was slated for 2020 but postponed due to the Covid-19 pandemic that swept across the globe.

The Zambian team, together with their bikes, will privately be jetted into the country on the 4th of August, 2021 as per their communication to the organisers.

According to FMU’s Vice President of Motorcycling, Kisitu Mayanja, FIM Africa has already given them a green light, to host the event after receiving a report from their Director Sporting, Tony Rowley who was in the country a week ago.

“Our entries opened on 9th May 2021 and closes on 9th of July,2021, and we still expecting more entries,” said Mayanja via phone.

ELIGIBILITY OF RIDERS:
As per supplementary regulations of the event, each country will be allowed to register up to 5 riders in each class for the Championship, designated as official riders, by their Federation.

Riders must produce either a Passport or Resident’s Permit as proof that they are eligible to compete for their country, with the approval of their FMN.

Countries are allowed to enter more than 5 riders in each class, but on the understanding that only the five designated riders entered, will be classified as official participants for the team results.
If more than 8 countries enter, countries MAY be asked to reduce team entries. 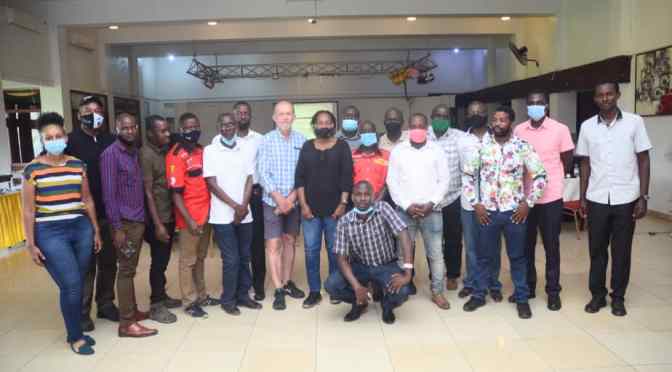 In a bid to prepare the officials for the forthcoming Motocross of All African Nations (MXOAN) championship, Federation of Motorsport Clubs of Uganda (FMU) rolled out a two-day training seminar.

Training was targeted at sharpening officials with the general sporting Regulations (GSR’s) of the sport, thanks to FIM Africa who partnered with Federation to make it a success.

The two-day workshop was held at Copper Chimnery housed at Uganda’s National Council of sports (NCS) headquarters in Kampala.

Rowley later met up with government officials including National Council of sports (NCS) General Secretary Dr. Bernard Ogwel together with other officials.

Dr .Ogwel on behalf of government, promised support towards the continental championship (Mxoan) set be hosted by Uganda on 6th-8th August, 2021.

The breath-taking track will host the 2021 Motocross of African Nations championship (MXOAN) set for 6th-8th August this year.

Rowley, who first inspected the redesigned racetrack, applauded the organisers, FMU for the good work done on the track so far.

“The environment is quite good, work on the track, I can say is at 65 percent, and I think the rest of the work can be done in time frame of like three weeks from now,” said Rowley while addressing the media.

Speaking about a whole redesign of the track, designer Arthur Blick Jnr thanked FMCU, stakeholders and sponsors, for their efforts towards the event preparations.

Blick added that, it is a great opportunity for Uganda hosting the African championship, the last time he designed was in 2012, when Uganda lifted the African title.

Blick promised to have all work and markups on track as recommended by the FIM Africa Sporting Director, done in two weeks.

FMCU President, Dipu Ruparelia, thanked FIM Africa for the kind gesture of appreciating them as A Federation with a silver accolade, and giving technical training to his officials.

The continental event is set to attract riders from South Africa, Zambia, Zimbabwe, Botswana, Morocco, Kenya, Namibia, and hosts Uganda amongst others.

Uganda who are currently ranked third on the continent behind South Africa and Zimbabwe, respectively.

Hosts last won the African title in 2012 when the continental championship was held in Busiika.