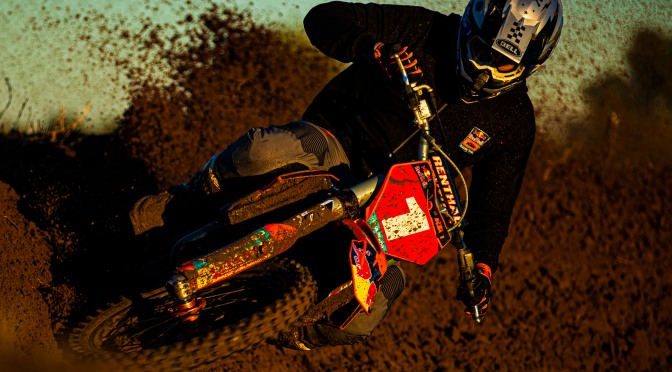 Red Bull KTM hero Purdon romped to a back-to-back MX1 title with yet another premier class double over teammate and closest title rival Cameron Durow. David Goosen clinched the title third for Energy Drink Husqvarna with a tie on points for third for the day with Yamaha lad Jesse Wright as they shared out the third and fourth places. Jayden Proctor’s KTM, Arnu Saaiman on a Honda and Johan Vogelesang’s KTM were next home.

Cameron Durow did the 250cc MX2 double, but all teammate Tristan Purdon had to do was follow him home to take his second ‘21 title. Which is precisely what he did to take it by a handful of points. David Goosen took both third places too, to end third in the title chase behind Durow, with KTM duo Leonard du Toit and Jayden Proctor who were next up following a day long duel with Cross Country refugee Davin Cocker’s Husqvarna.

Jonathan Mlimi put the finishing touches to another SA High School 125 cc Motocross championship with another double win on his Red Bull KTM. Miguel de Waal’s KTM was second in both motos. Husqvarna rider Luke Grundy and Out of Africa Monster Energy Yamaha lad Ethan Hoffman shared out the thirds and fourths ahead of Callan Broskie’s Husqvarna and Blake Young and Bryce Perersen’s KTMs.

In perhaps the Cannabis Energy TRP SA Motocross title fight of the year, Emmanuel Bako completed a remarkable come from behind championship win with double 85 cc Pro Mini victories over Neil van der Vyver and Ryan Adler in a Husqvarna 1-2-3. Championship leader leading into the finale, Trey Cox’s Red Bull KTM tied for fourth with Jordan van Wyk on another Husqvarna on the day, ahead of Cobus Bester.

Aiden Henley’s Out of Africa Monster Energy Yamaha was unstoppable en route to a double 65cc motocross win over title contender Blake Frost’s KTM and Husqvarna lad Sven Larsen. But none of that was enough to prevent Blade Tilley’s GasGas from scraping home to take the title with fourth on the day. He fought off Chris Brindley and Nicol Smit’s Husqvarnas for those vital points.

And a win and a third en route to second on the day behind Rayden Woolls’ GasGas, was enough for Trenton Kretzmann to wrap up the baby 50cc motocross title. Yamaha lad Cassie van Zyl held Aiden Retief’s KTM off for third ahead of Lou Rademayer’s Husqvarna and Hendrico Barwise on a Gas Gas. James Riley was next up ahead of Kaylin Oosthuizen’s KTM.

2021 proved after another challenging SA Motocross year that evolved as lockdown once again caused the calendar to adapt though the season. Still, SA’s finest put on a stellar show throughout, with most teams and riders already flat out in preparation for the 2022 season. All eight Cannabis Energy Drink and TRP Distributors South African National motocross champions mentioned above remain subject to MSA ratification.

Issued on behalf of SA Motocross