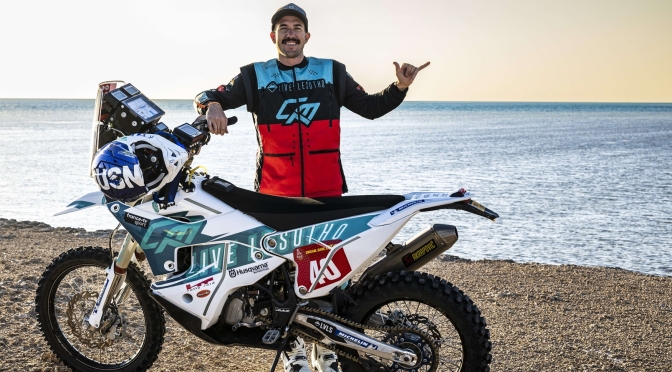 Charan Moore is no stranger to challenging terrain and the thrill of extreme Enduro racing. As the founder of Live Lesotho and Race Director of the iconic Roof of Africa event, he has a great deal of experience in putting some of the world’s best riders through their paces.

Having temporarily exchanged the Maluti Mountains of Lesotho for the deserts of Saudi Arabia, Charan is currently taking part in his second Dakar Rally. He took some time out from making running repairs to his rally bike in the bivouac to answer our questions. Moore is taking part in the toughest of all the categories, Original by Motul, where riders must compete without the benefit of a support team.

Monday, 09 January 2023 is an official rest day, with 8 stages already completed and 6 still to complete. At this approximate halfway point, Charan is in first place in the category, with a lead of 15’ 26” over second-placed Javi Vega (Pont Grup Yamaha).

Q&A with Charan Moore
1.They said they were going to make this year’s edition tougher, and they have! What are the main elements that you feel have made Dakar 2023 so much harder?

Yes, the organisers have made the Dakar much tougher this year, and the first week was hectic. Compared to the 2022 race, the stages are much longer, and there are also long liaison sections to contend with.

Last year, most stages were 300km or less in length; this year, we’ve already had five stages that were each over 400km. This means more of every kind of terrain, from sand dunes to camel grass to rocky riverbeds.

The weather has also been terrible – cold, rainy and wet – so the whole event has been more intense and “in your face”. The frequent changes mean you have to be adaptable as otherwise you could easily be thrown out of your rhythm and routine.

Arriving in cities at the end of some stages and dealing with traffic on a rainy night after a long day in the saddle is just part of what makes this one of the toughest races in the world.

2.You come into this as both a competitor as well as a race organiser – what has impressed you so far this year about the organisation of the event? Also, with regards to the calls that have been made, are there areas you would have maybe treated differently?

I’ve been impressed by the number of people involved in organising the Dakar – ASO has a core team of around 300 staff, plus up to 3 000 workers. They’ve all been really competent, and the decision-making has involved considering a lot of viewpoints, including our opinions as riders. The riders’ representative has been regularly engaging with us and then sharing our feedback.

The organisers have made some good calls both for safety reasons, and to maintain the Dakar’s reputation as the ultimate Rally Raid challenge. During last year’s event, there was a perception that the course was too easy – that’s certainly not the case this year. In fact, even Dakar veterans are saying that this is one of the toughest Rally Raid events in years!

The greatest logistical challenge has definitely been the weather – this amount of rain is unusual here in Saudi Arabia, and it quickly pools up in low-lying areas, creating a bit of havoc. The organisers have a great set-up for moving the bivouac to a new location, if necessary, which definitely helps.

3. A two week event like this is an assault on your physical, mental and emotional well-being – any secrets to share on how you cope with it all?

The easiest way to cope is by having the right mindset. For me, that means always having a smile on my face, being the best possible version of myself and embracing all the difficulties and changes that this year’s Dakar has involved.

I’ve had moments where I’ve felt down and out, but then I just need to remind myself why I’m here. I’m doing this for all the people who can’t be here, and for the army of people back home who are behind me and sharing their regular support. I know I’ve got what it takes to deal with any situation, so bring it on!

4.You’re entered…and are leading…the most difficult class in the race, the Original by Motul category by 15 minutes over Javi Vega going into the rest day, the lead has changed a couple of times this week and it’s turning into a really good dice. Do you spend any time together, either out on the course or afterwards in the bivouac?

Over the first 3 stages I was able to establish a good lead but having a fuel pump issue on Stage 4 meant that I lost a lot of time syphoning fuel. Overall, I’m trying not to push too hard, and I feel that I’ve got a lot left in the tank to gain more time if I need to.

Javi is a cool dude and a real character. We’ve been riding together a lot and hanging out in the refuelling zones. Of course, we’re competing against each other, but the camaraderie in the Original by Motul category makes us all feel like family.

5.As part of the rules of the class you are doing your own maintenance and servicing after each stage, are you changing your set-up as well, maybe suspension clicks or riding position or do you stick to one formula for each stage?

I did a lot of testing in advance to work out the best suspension settings and rider position, so I’ve not been changing too much during the actual race. My main priority each day is making sure that the bike works, so it’s more about fixing than tweaking. I already feel really good on the bike, so I’ve been concentrating each evening on making sure that everything is 100% ready for the next day.

6.You’re receiving so much support and encouragement from so many quarters; it must make a big difference to your morale particularly on the tough days?

I’m very conscious that while I’m just one person in the race, there are a great many people behind me watching the results, sending me messages of support and following my story. The Dakar Rally has a huge impact on people and helps them escape from the mundanity of everyday life. It’s great to have this level of support and competing in the Dakar is much easier when you know you have a whole country of passionate enthusiasts behind you.

The 2023 Dakar Rally resumes on Tuesday, 10 January with Stage 9, and concludes on Sunday, 15 January in the Gulf coast city of Dammam, after crossing the notorious Empty Quarter.

“Although there is a lot of riding still to come, we’d like to congratulate Charan Moore on his achievements in the Original by Motul class at this year’s Dakar Rally,” commented Mercia Jansen, Motul Area Manager for Southern and Eastern Africa. “The Original by Motul class is very much aligned with our core Motul values – to succeed in this class, you need perseverance, tenacity, passion and camaraderie or brotherliness. We’re particularly proud that a South African and Motul partner, is in the lead at the halfway stage,” she added.

As part of Motul’s commitment to supporting motorsports, the global brand is a main partner of the Dakar Rally. The presence of the Motul Lab offers competitor support and oil analysis to keep them running.

Motul products are also available for all the Original by Motul riders. Motul also sponsors drivers, riders and teams as a way of testing their products in the most demanding circumstances.

You can also follow Charan Moore on Facebook and Instagram for his personal take on his Dakar Adventure. To learn more about Motul’s product range and commitment to motorsports, visit https://www.motul.com/za/en

ABOUT MOTUL
Motul is a world-class French company with over 169 years of experience in the specialised formulation, production and distribution of high-tech engine lubricants (for two-wheelers, cars and other vehicles) as well as lubricants for industry via its Motul Tech division.

Since its inception in 1853, Motul has been recognised for the quality of its products, commitment to innovation and involvement in competition, and is also acknowledged as a specialist in synthetic lubricants. In 1971, Motul was the first lubricant manufacturer to pioneer the formulation of a 100% synthetic lubricant, derived from the aeronautical industry and making use of esters technology: 300V lubricant.

Motul partners with many manufacturers and racing teams in order to further their technological product development through experience gained in motorsports. It has served as an official supplier for teams competing in iconic Road racing, Trials, Enduro, Endurance, Superbike, Supercross, Rallycross and World GT1 events, including 24 Hours of Le Mans (cars and motorcycles), 24 Hours of Spa, Le Mans Series, Andros Trophy, the Dakar Rally and the Roof of Africa.

Published by:  Listen Up