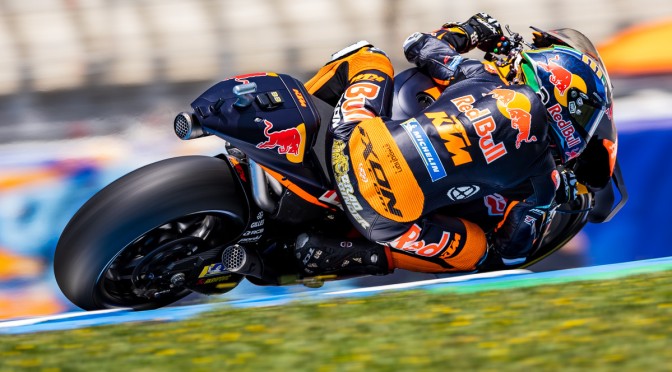 The sixth round of the world championship simmered in the bright Andalucían sunshine and Red Bull KTM Factory Racing’s Brad Binder was KTM’s quickest performer at Circuito de Jerez – Angel Nieto after a typically tight qualification.

MotoGP quickly throttled back into action and for the first Grand Prix on Spanish soil in 2022. The Circuito de Jerez–Angel Nieto first hosted the world championship event back in 1987 and has been an atmospheric and ever-present MotoGP venue. As well as being a popular race, notable for the noisy and enthusiastic fans, Jerez is also a staple testing venue, meaning that teams and brands have copious data around the 4.4km narrow layout that mixes hard braking points and fast flowing turns.

Brad Binder was the quickest of the KTM trio after a sunny Free Practice 1 and 2 on Friday as the South African slotted into Q2 reckoning. The tarmac was initially damp and slick after a thunderstorm on Thursday afternoon but by Saturday’s crucial final sessions was dry and more predictable. Brad just missed out on direct Q2 and then fell foul of track limits and a yellow flag for a fallen rider to miss his attempt in Q1.

The Gran Premio Red Bull de España reverts to the traditional race agenda with the Moto3 race getting the program underway at 11.00 CET, Moto2 at 12.20 and MotoGP at 14.00.

Brad Binder:
“I gave my best today and did all I could. This meant 15th today and obviously I would have liked to have been a bit faster but that’s what we managed. I think our race pace is much closer to the other guys so it is important to get a good start and to try and tag onto the front runners for a good result tomorrow.”