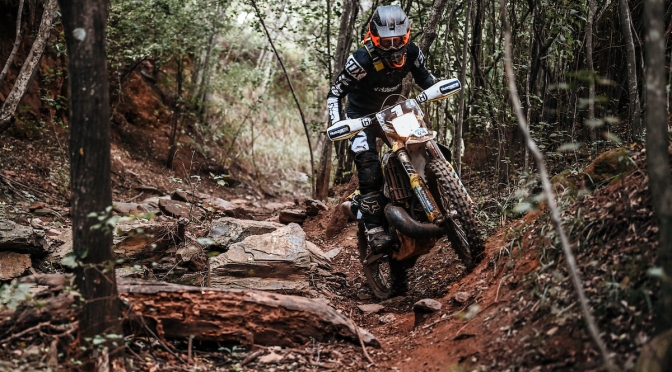 The Rockstar Energy Husqvarna squad are rallying up for what will be a riveting end to the National Cross Country Championship. Taking riders to some of the country’s most iconic offroad terrain, the season finale will unfold at Virginia Trails on Saturday, a venue in KwaZulu-Natal.

The fight for the prestigious OR1 title has come right down to the wire for the team’s leading rider Brett Swanepoel. After racing neck and neck this season, Swanepoel lines up tied for points with championship rival Michael Pentecost.

With the Natal trails as his training ground, Swanepoel will be as confident as ever in the familiar territory on Saturday.  Fresh off an unforgettable back-to-back Enduro victory, the rider will certainly look to keep his winning momentum going as the season draws to a close.

“After a few setbacks this season the points have really tightened up. I can’t bring anything less than my A-game this weekend and I expect an intense day of racing. I’m excited to see what my Husqvarna FX 450 will do – it’s stability, speed and handling makes it the ideal machine for this kind of race,” said Swanepoel.

Also lining up for a bar-to-bar battle is teammate Davin Cocker. With just a two-point lead in the OR3 Class, the rider will look to tap into new gears this weekend in the final race for the finish line.

Cocker has put on an impressive debut performance for the Rockstar Energy Husqvarna team this season. Excluding the Modimolle event where Cocker had a bout of bad luck, he has won every other race on the Cross Country calendar.

With his sights set on national glory and a promising top five finish overall, the rising talent will be a force to be reckoned with on his Husqvarna FC 250. He said, “I’m so excited to come into this event with the points lead! My FC 250 has been so smooth this season in everything from its power and handling to its speed. Now let’s go racing!”