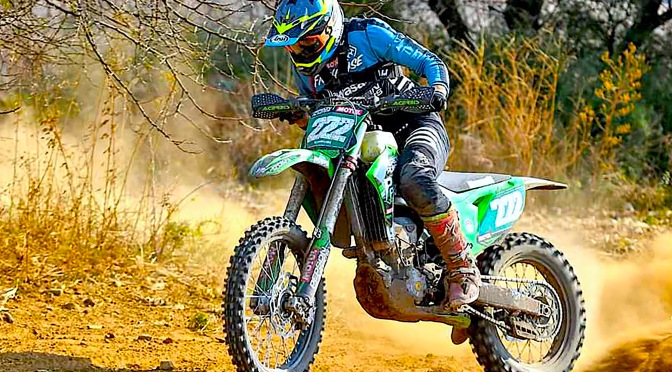 D’Artagnan Lobjoit consolidated his OR1 championship lead with fourth in class after leading most of the way, with Craig Alcock sixth. Taki Bogiages moved up to second and Kyle McKenzie fifth in the OR3 championship with a fine second and third in class. And Lee Thompson delivered a fighting fourth in the Senior race to strengthen his title charge too.

“What an awesome weekend with my Pepson Plastics Kawasaki Motul team in Ventersdorp!” D’artagnan Lobjoit enthused. “We made some tweaks to my KX450X since the last race and I was blown away by the performance of my bike, so a huge thank you to Lee Thompson for all his help.
.
“Tyron Beverley grabbed holeshot, but dropped his bike early in the race to hand me the lead, which I held for the first two laps. “Then my rear tyre deteriorated and I lost traction, which allowed Mike Pentecost to pass me on the third lap and we made the call to change my rear wheel at the end of that lap. “That dropped me back to fourth and I did my best to catch up again, but had to settle for fourth. “It’s going to be a tight championship but I’m up for the challenge and now I’m really hungry to get that first win on my green machine!”

“I had a good day despite a few small mistakes each lap,” Taki Bogiages explained. “The bike felt great and my Pepson Plastics Kawasaki Motul team made life easy as always. “I’m happy with my second on the day, which moves me into a competitive second in the GXCC 200cc OR3 championship chase. “Now it’s onward and upward and we will keep on building from here – can’t wait for the next round!”

“I really had a good day out there today,” Kyle Mckenzie admitted. “I had a great start and got the holeshot, but I made a mistake in the third corner and took most of the OR3 class down with me! “We got up, dusted off and raced on, on a track that had everything from fast flowing sections to mud and slower, more technical riding. “Thanks so much to my Pepson Plastics Kawasaki Motul team – my bike really felt amazing and I had a great time to bring it home a third in the OR3 class.”

“I was running a good second in Seniors until I wrong routed towards the end of the first lap, but it happens,” Lee Thompson pointed out. “Things are starting to work for me now, so I’m really looking forward to the next one. “Special thanks to the Pepson Plastics, Motul and Kawasaki South Africa.”

“Our Pepson Plastics Kawasaki Motul lads are getting quicker and quicker every race,” team boss Iain Pepper concluded. “Dart was in control up front in OR1, but was let down by a rear tyre and fought home in a fine fourth, while Craig Alcock keeps on improving. “Taki was right in the thick of the OR3 dice with Kyle right behind him and Lee had his best run yet in the Seniors. “That first win is so close we can all feel it – that will be one to celebrate!”

Pepson Plastics Kawasaki Motul Racing will be in action at the next round of the GXCC Northern Cross Country Motorcycle Championship at Verena, Mpumalanga on 31 July.