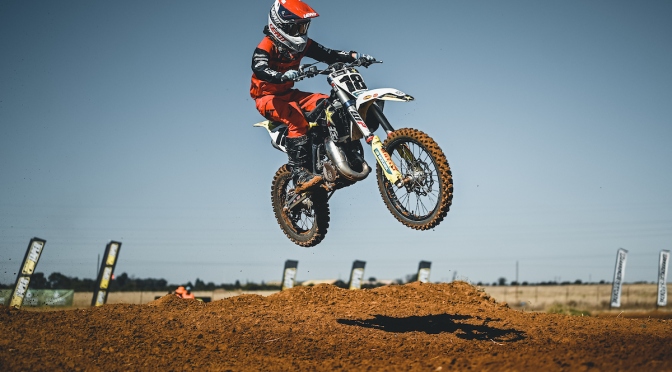 It was a breakthrough weekend of racing for Rockstar Energy Husqvarna. The motocross team took on the third round of the season in Welkom last Saturday and brought home a podium position in the MX1, MX2 and Pro Mini Class respectively.

Leading rider David Goosen admits to entering the round without too many expectations after being unable to train as hard as he had intended due to an illness. Having raced consistently at the front end of the MX1 field this season, Goosen had set the specific goal to narrow the gap on the leading riders in MX2.

In one of his most impressive performances of the season, the rider set off with a blistering pace on Saturday to snatch up the win he had been waiting for in the first moto of MX2. With a third place in the final moto, Goosen was pleased to make progress and take second overall.

Adding to the celebration at the Husqvarna camp was yet another consistent performance from Goosen in MX1. In the highly competitive field, he described both motos as a “heated event that certainly didn’t make for easy racing.” Despite the stiff competition, Goosen went 2-2 to take second overall.

“The track conditions were great! The loam soil gets some nice lines and becomes super bumpy – which suits me quite well. My Husqvarna FC 450 and FC 250 were great – I’m really starting to find the sweet spots on both of them. At this point, I’m feeling really motivated for what you could call the ‘second half of the season’. With every race, I feel more excited to work on something new. There are things I want to fine-tune as I aim to bring home some wins, but I’m also just really happy with how consistent I’ve been,” said Goosen.

For Rockstar Energy Husqvarna teammate Neil van der Vyver, the day was off to a challenging start. After a slow qualifying time by his own high standard, the youngster made some adjustments to his setup before lining up for the first Pro Mini moto.

With a strong determination to come back swinging, Van der Vyver set off the take the holeshot in the first heat. From the moment he took the lead, the rider never looked back and stormed to his first win in the Pro Mini Class this season.

“It felt great to go from qualifying 17th in practise to taking my first ever Pro Mini win! It’s something I had been working towards all season,” said an elated Van der Vyver.

After a challenging start in the second moto, the rider had to dig deep to keep his composure and fight his way back to the front end of the field to ultimately claim second place overall.

“We ticked a few boxes this weekend and we’re happy with the progress! My pace felt good, my bike felt good – I’m excited to watch our plan for 2021 keep unfolding,” he said.

Husqvarna South Africa’s Brand Manager Fred Fensham gives a closing comment: “This season has been all about getting our two riders comfortable on the bikes and Welkom was proof that we are on the right track. David was super impressive despite coming off some health issues and Neil finally bagged that illusive Pro Mini win – that will certainly give him the confidence he needs to keep building on the 85cc! I am super proud of our two riders bringing home three second overall finishes against really tough opposition!”