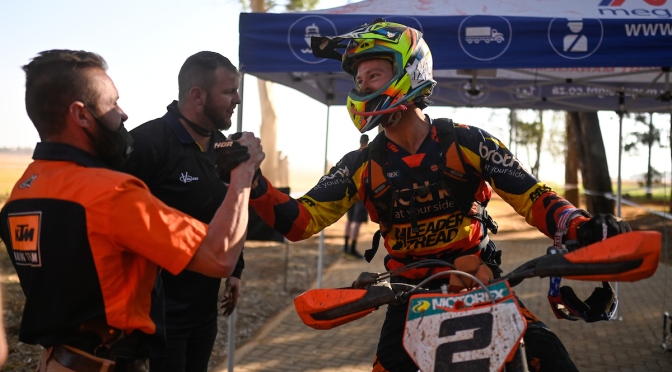 This weekend marked the highly anticipated return to racing for South Africa’s motorsport stars. The second round of the National Cross Country Championship was hosted by Gauteng’s local racing series, GXCC Racing, and took place under strict Covid-19 regulations.

It was clear from the get go that reigning OR2 National Championship Jarryd Coetzee had spent the past seven months preparing for a massive assault on the title. After starting the season in second place, Coetzee returned to the top step of the podium with not only a class win, but a victory overall.

“I couldn’t have had a better race. It was gnarly out there – it was a really good mix of terrain. There were some moments where I wondered if I’d be able to maintain the pace until the end, but it all worked out like I’d hoped. I can’t thank my team enough for preparing my KTM 350 XC-F so well,” said Coetzee.

It was a successful day of racing for the rest of the Brother Leader Tread squad, who all managed to bring home some silverware. All eyes were on the team’s newest recruit Charan Moore, who battled it out in dusty conditions to secure the second step on the podium in the prestigious OR1 Class.

It was a nail-biting event for Bradley Cox as he entered a bar-to-bar battle with OR3 rival Davin Cocker. The race literally came down to the last 100 metres where Cocker managed to narrowly beat Cox to the finish line. Fans are in for an exciting showdown this season as Cox will now have to pull out all the stops in order to defend his 2019 National OR3 title.

“Davin and I went head-to-head those last two laps. It’s always an exciting race when it comes down to the last few hundred metres! I’m still in it for the championship, and plan to take this momentum into the next round,” said Cox.

The countdown has officially begun for the next race of the championship, which will take place as a double-header event in KwaZulu-Natal.

KTM South Africa’s Marketing Manager, Louwrens Mahoney commented, “Well done to the organisers of this event and our team for racing their hearts out today. We’ve all gained some valuable experience from this, and I don’t doubt that the riders will continue working on fitness and technique for the next one.”