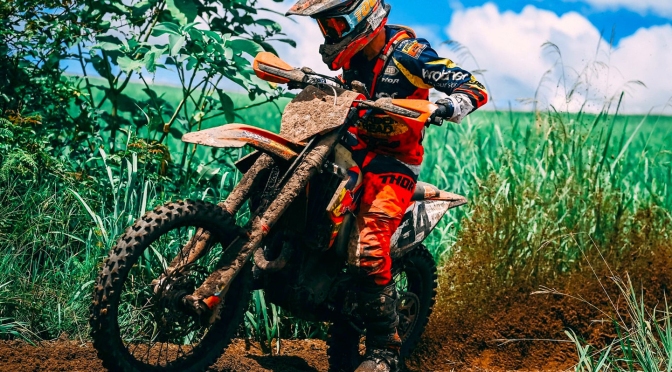 Battle lines are drawn across all classes as the 2022 Trademore Feeds SA National Cross Country Championship field converges on Legends in Pretoria for Pepson Plastics’ season-opener Saturday 26 February. Several riders have changed classes, while others will ride new machinery. And Honda now joins the fray to add a little red to the sea of orange, white and blue, with an increasing proportion of green.

Multiple champion Brett Swanepoel shifts down from the open class OR1 to his preferred 350cc OR2 for Husqvarna Racing. There he will find both former motocross champion Kerim Fitz-Gerald moving into his second season on a Red Bull KTM and Scott Heygate, who moves up from ending second OR2 last year, on a Brother Leader Tread KTM. Add the likes of Juan Niebuhr’s Rhubein KTM, Dylan Cox, who moves up from OR3 on a RBS Powasol Yamaha and Dijan van der Merwe’s experimental Franchise Co.Tork Craft Kawasaki.

There’s a change of colour at the head of the Seniors race, where it seems red and green will now be flavour of the month. Champion Wade Blaauw has moved onto a Sleepover CIT Torkcraft Honda, but he won’t have it all his own way this year. That’s if Pepson Plastics Motul Kawasaki duo, former multiple SA Cross Country champion Kenny Gilbert on a 450, and many time motocross champion Wyatt Avis on a 250, have anything to say about it. Add Jayden Boyce’s Kawasaki and Ockert Swart’s Cow Welfare Husqvarna.

Wian Wentzel must start as a High School favourite if his recent regional pace was anything to go by on his Franchise Co. Tork Craft Husqvarna. But he has Junior champion Cobus Bester on a Spherical Holeshot Husqvarna KTM, Durban lads Ross Ramseyer and Nathan Westerdale, as well as Rory Donaldson’s KTM, Aidan George on a Husqvarna and Blu Cru Yamaha lad Riley Bac to deal with too.

Some things are for sure. New battles will be joined at the Pepson Plastics season opener. Fresh Trademore Feeds SA National Cross Country Championship rivalries shall commence. And it all comes to a head at Legends on Saturday. It is time to race!