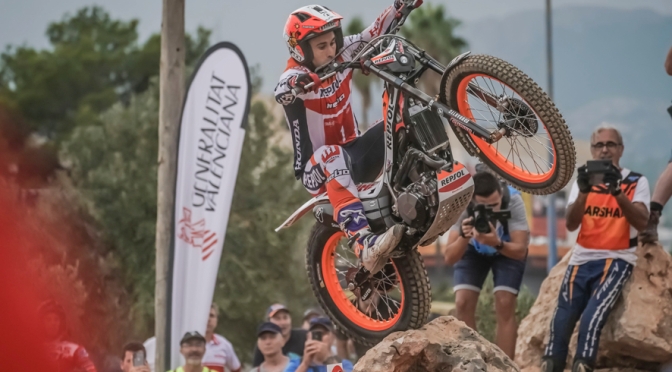 At the beginning of the year the Spanish superstar nailed his 14th-straight FIM X-Trial World Championship with an unblemished five-from-five victories and the 33-year-old will be fully focussed on repeating this feat outdoors, starting with two days of competition at the ski resort of Isola 2000 on September 4-6.

With COVID-19 forcing a radical revision of the calendar, the 2020 championship will be fought-out over four rounds with each event featuring two days of points-paying competition. From France the best Trial riders on the planet will head to Pobladura de las Regueras in Spain and then Sant Julia in Andorra over successive weekends before signing off with TrialGP Italy at Lazzate on October 9-11.

There will be no let-up in the schedule at Isola 2000, last used for top-flight competition in 2016 when it was the venue for the Trial des Nations. Situated high in the French Alps but less than 50 miles from the Mediterranean city of Nice, the scenic purpose-built facility will test a full-house of TrialGP Women, Trial2, Trial2 Women, Trial125 and Trial-E classes that are also in action alongside the premier TrialGP riders.

Bou’s main opposition should come from his fierce rival and compatriot Adam Raga (TRRS). The two-time TrialGP World Champion has pushed Bou hard throughout his 13-year reign but Raga is by no means the only opposition in a field packed with quality and you can expect strong challenges from riders including all-action Japanese fan-favourite Takahisa Fujinami (Repsol Honda), 22-year-old Jaime Busto (Vertigo) and 2019 World No.5 Jorge Casales (Gas Gas).

Emma Bristow (Sherco) will start as a hot favourite to win her seventh consecutive TrialGP Women crown. Bristow’s unbeaten since the final round of the 2017 championship but the British lioness will need to remain fully focussed because her rivals – led by Spain’s Berta Abellan (Vertigo) and Sandra Gomez (TRRS) – are queuing up to dethrone her.

Spain’s Gabriel Marcelli (Honda) was crowned Trial2 World Champion last year but he’s moved up to TrialGP for 2020 leaving this class up for grabs. Veteran Matteo Grattarola (Beta) will be hoping to regain the title he won in 2018 and expect Britain’s Toby Martyn (TRRS), who came so close to taking the title from the Italian two years ago, to be a contender after a slightly below-par performance last year. With both riders on new machinery in 2020 this class could be too close to call. However, it’s by no means a two-horse race and there is no shortage of talented riders in a stacked field who will be looking to make their mark.

It’s also tough to pick a front-runner in Trial2 Women. Last year’s top two riders will not compete this season, guaranteeing that there will be a new name on the championship trophy at the end of the campaign. Going on the 2019 formbook you can expect Britain’s Alicia Robinson (Beta) – who won last year’s final round – to be in the hunt.

A breeding ground for future champions, Trial125 is packed with up-and-coming talent. With nothing to gauge form on so far this season – and last year’s top riders moving up to Trial2 – you should expect the unexpected, although Spain’s Alex Canales (TRRS) will be hoping to improve on his three podiums in 2019 and World ranking of No.4.

Now in its fourth year, the FIM TrialE Cup for electric motorcycles was dominated last season by former X-Trial World Champion Albert Cabestany (Gas Gas) who remained unbeaten and the Spanish veteran is back to defend his title and will be tough to beat.