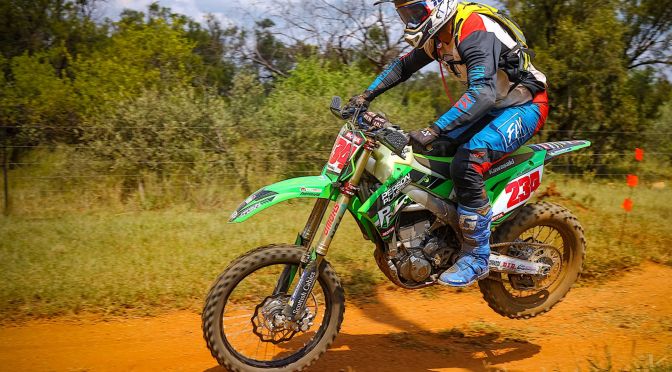 Kawasaki Racing heads to the 20-21 May third round Trademore South African Cross Country Motorcycle Championship Ganyesa desert race in a strong position. With two of its riders leading their championships and several other riders right in contention, the fast and dusty Northwest Province race also favours the team.

“I have had a tough but successful start to the season,” Mike Pentecost pointed out. “I have picked myself up and the team pulled off some minor miracles to help get me and the bike to the finish, but I’m ready and looking forward to racing my Franchise Co. CIT Kawasaki KX 450 X on terrain that suits us best this weekend. “Now all I need do is have a clean run and we should be right up there in the mix of the lead battle. “Can’t wait!”

Kenny Gilbert is another man looking to get the best out on his Pepson Plastics Motul Kawasaki KX 450 X racing with Scottish Cables in the desert. “I have had a pretty good run so far in my comeback season and I’m really enjoying racing as part of this special team,” Kenny explained. “This weekend we head back to the desert and I can’t wait. “I really enjoy the quick stuff and armed with my KX 450 X, I’m keen to see how it all pans out at Ganyesa.”

“Yeah really looking forward to this round,” Gilbert’s Pepson Plastics Motul Kawasaki KX 250 X Seniors teammate Wyatt Avis explained. “I’m making improvements every time we race both physically and how I’m approaching it mentally so I’m excited to see what happens. “Can’t thank the team enough for their support while I figure some of these challenges out!”

Taki Bogiages is looking forward to racing fully fit on his OR3 Pepson Plastics Kawasaki Motul Kawasaki KX 250 X. “We have had a long break now since we last lined up to go racing and I’m extremely excited to get back out there with my team! “We have not had a race out Vryburg way in quite a while which makes me excited for this ‘new’ event on the calendar. “Let’s see what these Kawasakis can do in the desert bush! “It’s going to be good!.”

There is one change in the team for the Ganyesa race. Wade Den hurt his wrist while training off the bike and the team has drafted JC Nienaber in to ride Den’s Pepson Plastics Spherical Bearings Kawasaki KX 450 X.

“We are ready for the desert,” Franchise Co. CIT team boss Harry Grobler concluded. Pepson Plastics Kawasaki Motul Racing with Scottish Cables team principal Iain Pepper added: “We won two classes last time out, so the plan is to go one or two better in Ganyesa on the sort of terrain we thrive on. “Go get it guys!”