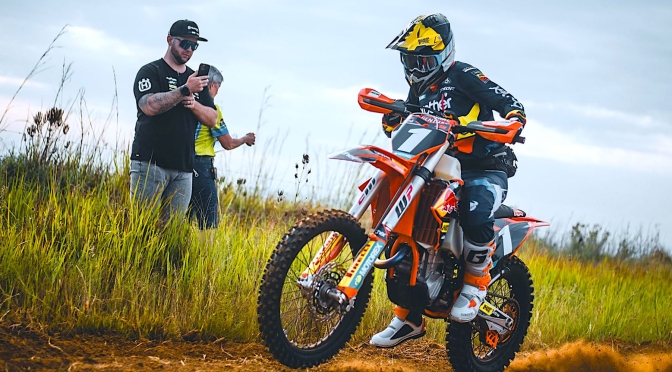 It could very well be all change when the Trademore Group MSA South African National Cross-Country Motorcycle Championship heads to its second round at Dalton, near New Hanover in KwaZulu Natal on Saturday 26 March. Organisers promise a route a little more flowing than the usual, tough KZN fare, yet still with a fair mix of terrain and technical difficulty. But with the championship leader a doubtful starter and more than enough revenge on the table, Dalton promises to be a cracking weekend.

First and foremost, South African champion and first round winner, Bradley Cox is working flat out to be fit in time to swing a leg over his OR1 Brother Leader Tread KTM for Dalton. Cox was hurt in a tumble at the recent Abu Dhabi Desert Challenge and he’s hoping to be fit in essence for his home race on familiar terrain. Even if he is fit and ready, Brad faces a renewed challenge from his regular rivals, most of whom hit trouble of some sort in that dramatic Pretoria season opener.

OR2 winner last time out, factory Husqvarna man Brett Swanepoel had to charge back from tenth to second, and he cannot be discounted on his home race aboard his favourite sized 350cc machine. Teammate Davin Cocker was seething mad after getting stuck in the mud while leading in Pretoria aboard his factory 250cc OR3 class Husqvarna. And reigning 450cc open class OR1 champion, Michael Pentecost has not only shown great regional form on his OR1 Franchise Co. CIT Kawasaki, but he wants better than his troubled fifth in Pretoria.

They will all have fresh competition from former multiple motocross champion Wade Den, who joins the OR1 fray alongside Pepson Plastics Scottish Cables Motul Kawasaki OR3 teammate, Taki Bogiages who returns from injury. Others to keep an eye on include OR2 men, Erik Merry’s RAD KTM, another former motocrosser, Kerim Fitz-Gerald’s Red Bull KTM, Juan Niebuhr’s Rhubein KTM, Dylan Cox’s RBS Yamaha and ever faster Franchise Co.Kawasaki rider Tyron Beverley.

Gilbert will have Wade Blaauw’ Sleepover CIT Honda, Marco Cocci on a Shimwells Yamaha, Pepson Kawasaki teammate Wyatt Avis, Kyle Potgieter’s Fast KTM and Ockert Swart’s Cow Husqvarna to contend with in Seniors. And Kobus Jonck and his KTM will be out for a repeat Masters victory over Husqvarna duo Greg Nairn and Wayne Farmer, following his success in Pretoria last time out.

So, whether Bradley Cox is ready to ride or not, the second round Trademore Group MSA South African National Cross-Country Motorcycle Championship race promises to be a cracker. It goes down at Dalton, KZN, Saturday 26 March.