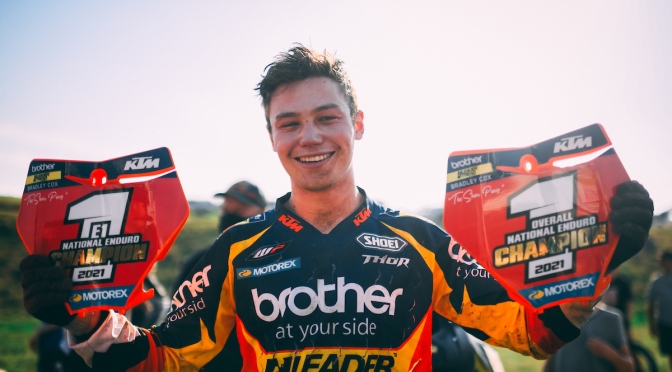 The curtains of the National Enduro Championship have officially drawn to a close. The season couldn’t have ended better for Brother Leader Tread KTM who walked away with top honours as leading rider Bradley Cox stormed to the victory overall.

The final event of the season took riders to Creighton, Kwazulu-Natal, where Cox had the home ground advantage. While the race was off to a shaky start by his own high standards, Cox held his composure to cross the finish line and officially snatch up the overall win that he had been waiting for.

“The actual race this weekend was really tough for me – I was just so nervous and so much was at stake. After a shaky start, I managed to claw my way back to finish fourth for the day – I felt so relieved to cross that finish line! I’m excited about my future in Enduro and I plan to keep putting KTM on top!” said Cox.

Having only started racing Enduro four years ago, Cox describes putting in tremendous work behind the scene to establish himself as a frontrunner in this sport. He added: “When I consider the fact that I only started Enduro four years ago, to achieve the overall win is really something special. It took a lot of hard work, but as I saw myself progressing over the years, I truly believed that the overall win was possible. Now I get to ride with the number one plate next year, which is unreal!”

Cox will now turn his focus to finishing off the National Cross Country Championship, where yet another overall victory looks promising for the multi-disciplined star.

Brother Leader Tread KTM teammate Charan Moore had a solid finish to his debut season with the orange team. While the rider faced his fair share of setbacks this year, he secured an impressive fourth place in the prestigious E2 Class and sixth place overall.

Having only narrowly missed a podium spot in his class, Moore will return more determined than ever next season as he looks to shake off his rookie status in Enduro. With a wealth of experience under his belt, the rider commented: “For my first ever Enduro season, I’m really proud to have finished where I did. I also know what it takes to get to the top now. Something I really want to work on is my pace so that I can narrow the gap on the leaders in my class.”

Rounding out the orange squad was Kirsten Landman, who was set to race her last national event for the Brother Leader Tread KTM team. While the Enduro queen had hoped to close this chapter on a high note, she was forced to pull out of the event due to an unfortunate illness. Landman is proud, however, to have spent the last nine years of her life representing the prestigious team and looks forward to racing for them at the Roof of Africa later this year.

As the national season comes to an end, KTM South Africa’s Marketing Manager Louwrens Mahoney commented: “I cannot be prouder of not only our riders but everyone involved in the team. It has been a long season with many of ups and downs, tears and sacrifices, but to end the season with a double championship and the number one plate makes it all worth it. The work already starts for the 2022 season as we learn from all our experiences and find ways to improve – race by race.”