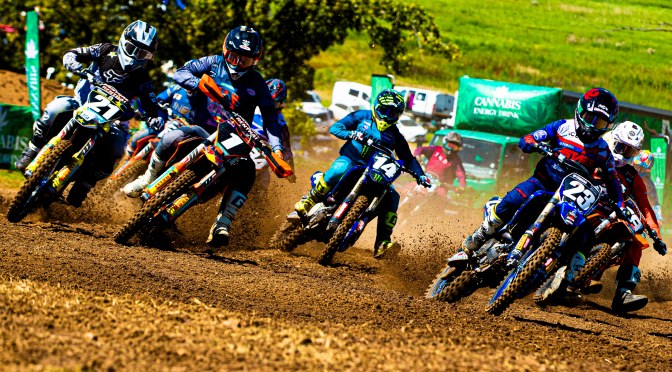 Splendid racing, excellent fields and a little controversy on the side were highlights of an action packed 2021 Cannabis Energy Drink & TRP Distributors South African National Motocross Championship season opener at Terra Topia in Diepsloot, Gauteng on Saturday. But it was national MX1 champion, Cathcart EP hero Tristan Purdon and his Red Bull KTM who stole the headlines with overall victory in both the 15-bike strong MX1 and MX2 races.

Purdon will have the championship leaders’ red plates on both his machines when he arrives at his home province Rover races in Port Elizabeth after fighting back to win the second open class MX1 race, and a dominant double in the quarter-litre MX2 motos.

Holeshot king Johan Vogelesang took the early opening heat MX1 lead with Tinswalo Yamaha rider Anthony Raynard in pursuit before Jesse Wright’s Out of Africa Monster Energy Yamaha took over. But David Goosen was soon on the move after biding his time on his maiden outing aboard his new Rockstar Energy Drink Husqvarna and he soon passed Raynard and then fought Wright before moving ahead for the win.

Purdon meanwhile, extracted his KTM from the pack after a middling start to move up and follow Goosen home from Raynard, Wright and KTM lads, SA OR3 Cross Country champion Bradley Cox and Jayden Proctor. But SA MX1 champion Purdon made no mistakes in the second moto, while Raynard beat Goosen to second ahead of Wright, Cox and Proctor. So Purdon heads to PE with a two point lead over Goosen, with Raynard in close attendance.

Tristan Purdon then took his turn to take a come from behind opening 250cc MX2 win from Red Bull KTM teammate Cameron Durow. He entertained in a dice with Raynard and the closing Goosen’s Husqvarna, ahead of Dalton Venter’s Yamaha and Jayden Proctor on a KTM. Purdon then made it a double over Goosen, Raynard, Durow, Venter and Leonard du Toit to take a strong early title lead over Goosen, Raynard and Durow, who are split by a point.

Yamaha duo, over-30s Senior man Grant Frerichs and over-40 Masters champion Ian Topliss diced hard for the first MX3 win. Dwayne Kleynhans’ KTM and Deon du Toit on a Kawasaki were next up in over 30s and Jaco Smit’s KTM and Bruce Viljoen completed the over 40 podium. Frerichs then held Kleynhans off to win in race 2 with Topliss topping the over 40 field in third as Frerichs and Topliss took their respective classes for the day.

The Ladies Motocross status quo was intact after the first heat as dominant 2020 champion Kayla Raaff was back up to her old tricks on her Kawasaki ahead of Leah Heygate’s KTM, Husqvarna sisters Jadene and Cheyenne de Lima and Dakota Grobbelaar’s Kawasaki. But it was all change in heat 2 as a delighted Heygate put one over Raaff, Jadene, Cheyenne and Grobbelaar, to head to Nelson Mandela Bay in April in the joint title lead with Raaff.

The school kid motocross action was not only fraught between packed grids on track, but there was ample action off it too. Not so much in the 125cc High School class that saw 27 machines line up at the gate as Jonathan Mlimi picked up where he left off in High School motocross. He took a couple of laps to reel in and pass Ethan Hoffman’s Out of Africa Monster Energy Yamaha and clear off to win the opening heat on his Red Bull KTM.

Hoffman’s Yamaha teammate Hayden Tully ended up second, while KTM duo Miguel de Waal and Mark-Anthony Filip also moved ahead of Hoffman who slipped to fifth ahead of Luke Grundy’s Husqvarna. De Waal then sped to the second moto win from Tully, Mlimi, Grundy, Hoffman and Filip. That sees de Waal and Mlimi in the joint championship lead, with Tully and Grundy in close attendance en route to the Port Elizabeth second round.

There was drama in the Pro Mini races as a trio of midfield riders were excluded for ‘jumping under yellow flags’, a factor that would have a far more drastic effect on the 65cc results as another heartening 28 riders lined up for the start. Gas Gas rider Blade Tilley made a forceful move to pass Jack Pullen’s Husqvarna as those two came home ahead of Trent Valsecchi’s KTM. But all three were excluded for jumping under yellow flag conditions…

Which meant that fourth placed rider Blake Frost took the win on his KTM, ahead of Aiden Henley’s Yamaha and Husqvarna trio Sven Larsen, Nicol Smit and Alex Cooper. Tilley and Pullen were back in charge as they took the second moto 1-2 ahead of Frost, Henley ,Valsecchi and Smit to leave Frost, Henley and Smit in that championship lead. This should now prove an intriguing title table to watch…

A strong field of 25 baby class 50cc motocrossers is always a good sign. Champion Trenton Kretzman and his Husqvarna wasted no time to move ahead of Rayden Woolls’ Gas Gas for the win. KTM kids Maxwell Fourie, Ross Mackenzie, Aiden Retief and Travis Liddell followed. As it was in other classes, Woolls struck back to beat Kretzmann in moto 2 and go even in the title chase. Casper van Zyl’s KTM was third from Retief, Fourie and Ross MacKenzie.

There was more to be positive about beyond great fields and brilliant racing at Terra Topia. With an increased presence of brands like Kawasaki among the KTMs, Husqvarnas and Yamahas, as well as the winning arrival of Gas Gas in the paddock, it seems Motocross is certainly back on the up in South Africa.

Issued on behalf of SA Motocross