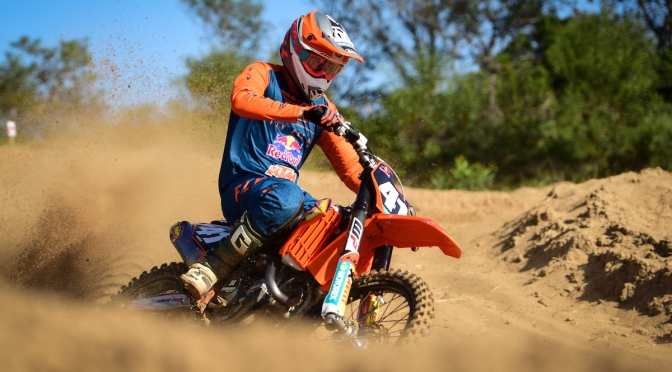 In what has been a year like no other Red Bull KTM travel to Bloemfontein looking to stake their claim as the undisputed industry leaders in the South African Motocross landscape. The National Motocross series draws to a close with what promises to be an action-packed double header round in Bloemfontein this weekend. With three championship titles within the team’s grasp, the Orange machine is priming itself for war.

Spearheading the hunt for championship titles is Tristan Purdon. Last year’s finale saw an agonizingly close finish to the 2019 season where Purdon finished as runner-up. The rider is preparing to set the record straight this time around and will line-up in Bloemfontein leading the MX1 Class by a single point. No stranger to a close race to the line, Purdon will look to draw upon the gut-wrenching disappointment he experienced last year to fuel a ruthless attack upon his rivals in his bid for the crown.

Also entering the fray this weekend as the frontrunner in his class is Red Bull KTM team member Jonathan Mlimi. It has been an epic comeback season for the young gun, who has fought his way back to the top step after a lengthy injury in 2019. With his sights set on winning his first High School Championship and a 15-point lead on his competitors, this weekend looks promising for the rising star.

Rounding out the orange squad is Kerim Fitz-Gerald. The rider is currently tied for third place in the MX2 Class with none other than his own teammate – Tristan Purdon. Not only will Fitz-Gerald need to get ahead of Purdon, but has to make up the 20 point deficit keeping him from the top of the leaderboard. As a multiple national champion, Fitz-Gerald will draw on his past experiences to light the fire and capitalize on every one of the 100 points up for grabs this weekend.

Fully confident that his team has what it takes to storm to motocross glory, KTM South Africa’s Marketing Manager Louwrens Mahoney commented: “This weekend the team goes into the last round of the season hungrier for victory than ever before. All three of our riders stand a chance to walk away with a championship! I have so much confidence in our riders and the team, knowing the hard work that went into the preparation for this last round. All we can do now is have fun and do what we do best!”